The Free Trade "joke" is on us and no one's laughing.

Missing from the 'Free Trade' debates:
- where the replacements are for the 6,000 lost factory jobs and over $150 millions in annual payrolls from the now-closed Torrington Company (Ingersoll Rand) in Torrington, CT, plus the lost tax revenues to state, local and federal governments (including to Medicare and Social Security) as a result.

-ditto re replacements for lost jobs at Vise-Grip factory in DeWitt, Nebraska, together with the disgusting general decrease in lost quality of many tools and other goods members of Congress continue to insist all Americans buy under continuing WTO and NAFTA and other trade treaties.

-ditto millions of other jobs, factories, entire industries and trillions of lost wages, benefits, homes and tax revenues all across America as a result of continued refusal by members of Congress to repeal WTO and NAFTA and other trade treaties - along with, of course, more hoopla over the need to fast-track ill-conceived more such treaties.

-WHY Communist China and most of our other Asian trading partners buy virtually NOTHING from the USA, increasing ongoing structural unemployment and poverty in America.

-And WHAT, exactly, China is using the trillions we send them for? Modernizing their military. Buying and monopolizing important resources-and adding building islands to shoot at our airplanes. Really.

"As the Chinese military races to build outposts on reclaimed land, nearby countries are alarmed by the territorial expansion.".

The chart below shows HUGE and ever-increasing levels of imports to the US from Communist China following passage of WTO by Congress decades ago:

-$12 billion exported to China per year

= an Annual estimated trade DEFICIT with China of   $168 billions per year in recent years. That's a lot of US jobs and industries.

*** And we have not yet counted the trade deficits with Japan, South Korea and our other False Trade "partners" who

buy little or nothing from us and who invest little of the trillion$ we've exported back here in the good ol' USA. ***

Given this record, members of Congress and various Presidents have ignored their duty to protect America and Americans from unfair and harmful trade treaties which may well be unconstitutional and which treaties have clearly placed US-basedindustries, firms and factories and workers in a negative economic position.  Not to mention increasing our national and state debt, crippling Medicare and Social Security, undermined and destroyed our once proud economy and tax base. Unless immediate remedial action to repeal WTO and NAFTA is taken - instead of "fast-tracking" more such nonsensical treaties, the adverse and growing harm to Americans and their prosperity and freedom will continue and grow.  Even Asian government and business leaders must realize that slower exports to the US mean slower economic growth at in Asia, begging the question of WHY they have invested little of the hard cash we send them back into America to keep their best customers working for decent pay and benefit (and buying their stuff!) Lacking the robust incomes Americans once had means an end to economic growth for all nations who think they can play "free trade" to ONLY their advantage. In the meantime, Americans and the foolish people they continue to elect can say goodbye to the decent health care, education and national defense a strong economy once supported. Why else would we be looking at a national debt - including Social Security and Medicare - of over $80 trillions, and another $1 trillion in student loan and personal and family debt? The recent long and ongoing US recession was not a "housing bubble" but an INCOME COLLAPSE.

The latest answer in Washington? President Obama wants more false trade instead of asking Professor Alan Binder, of Princeton to have  beer with him so he can learn how many more US-based jobs are ending up exported to offshore locales.  How many US jobs might be offshoreable?

SINCE JUNE 21ST, 2015, PUBLIC INTEREST NEWS NETWORK STILL HAS HAD NO REPLY TO THE FOLLOWING FROM CONGRESSMAN HINES OF CT:

written in part by at least some of your (banking) campaign contributors....and decent jobs for all Americans...

I called the Office of Congressman Hines today and was advised to send this along to you for a reply from the Congressman. Since I created something called Public Interest News Network ( www.publicinterestnewsnetwork.com ) in order to report on anything relating to the public interest, I write to ask a few questions of Congressman Hines which I'd like to share with my vast readership base:

"Currency intervention is the action of one or more governments, central banks, or speculators that increases or reduces the value of a domestic currency."  - courtesy of: http://en.wikipedia.org/wiki/Currency_Manipulation

Example: Japan's central bank just***  deliberately reduced the value of Japan's currency, the "yen," in order to reduce prices of their exports to consumers in the USA, Europe and elsewhere.

Anyone notice why and how all those cars now being marketed to American consumers for Honda, Toyota and Nissan suddenly got a lot less expensive? While all countries (either directly or via their central banks) try to play the 'currency manipulation' game, including the US, China, South Korea and Japan can be said to have succeeded the most if we look at how their exports almost always exceed their imports from other nations, effectively creating more jobs for their own people, expanding their economies and wealth and government revenues faster than other nations, and taking more business away from unsuspecting companies and nations who continue to ignore these obvious market and currency manipulations.

***2) from the NY Times on Japan's recent manipulation of its currency, the Yen: 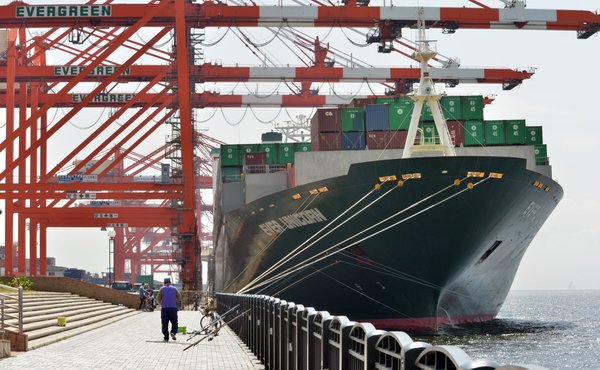 Containers are unloaded at a cargo terminal in Tokyo last month.

The Bank of Japan has moved aggressively to reinvigorate the economy and fight deflation.

By HIROKO TABUCHI and GRAHAM BOWLEY of the NY Times

TOKYO — For almost two decades Japan’s economic fortunes have deteriorated, and little seemed to be done about it. 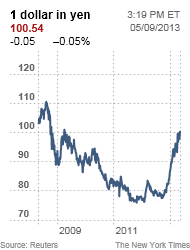 But in the last few months, the nation’s new prime minister, Shinzo Abe, has pushed policy makers and other officials to take bold steps to revive one of the world’s largest economies. Their handiwork was evident on Thursday when the Japanese yen hit 100 to the dollar for the first time in four years.

Normally a weakening exchange rate might be taken as a sign of decline. The yen has fallen nearly 14 percent against the dollar this year, and no currency has fallen more except the Venezuelan bolívar. But in Japan’s case, it is a sign that the policies put in place by Mr. Abe and Haruhiko Kuroda, chairman of the Bank of Japan, are starting to work. A weaker yen makes Japanese exports more competitive around the world....

Please read the  rest of this excellent NY Times article at:

3) So what's wrong with a little (or a LOT) of currency manipulation?

"Must read on currency" "Fred Bergsten, of the Peterson Institute of International Economics,

has a must read piece on the global currency undervaluation wars. (hint: click 'a must read..." or the link below to read why currency manipulation is not a good thing.)  Yes, “wars”.  His words, not mine.

Read it if you want to know:

1.  How currency wars are a growing, not receding, problem;

3.  How many millions of jobs we’ve lost because of our failure to fix this.

5.  How much horribly worse our trade deficit will get without a fix.

Anyone who supports a trade agreement without a currency fix within it is smoking something."

actual site of Fred's article (if clicking 'a must read' above did not work for you):

-Fred's article and Mike's intro are courtesy of